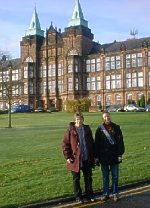 Maria Davidsson and Kajsa Classon are two teachers from Örebro in Sweden, who teach children 6 -12 years old, at Almbro skola

We got interested in Storyline when we heard a lecture about it in spring 2001. After that we searched for schools that worked with the method. We phoned Skolverket and asked them, and they suggested that we should to call the British Embassy. Then we faxed a paper explaining what we were interested in. They didn’t answer us for such a long time that we thought they had forgotten all about it.

One day Maria got a phone call from a lady at the British Embassy. She said that Steve Bell wanted to meet us in person!!! According to her the meeting would take place in London. We checked the homepage of Storyline and found that we were scheduled to meet Steve in Glasgow. How exciting, none of us has had been to Scotland before! Now a hectic period of emailing started. Steve was a really fun and fast pen pal!
How to travel and stay was a little complicated to organize. After trying Internet and a travel agency, we finally found out that all our research was in vain, because our school took care of all the arrangements.

At 6am Kajsa picked Maria up to go to Örebro Airport. The weather was freezing cold (7 degrees centigrade below zero) and we had packed warm clothes in two big suitcases. In the afternoon we landed at Glasgow airport and it was warm! (13 degrees centigrade). Now we had to search for our hotel. The town had steep streets and we had too many clothes on and with us, but finally we checked in at Theatre Hotel.

After leaving our things in the rooms, we took a map and went out to see the town. We had read about a market and we decided to try to find it. While looking at the map for Barras Market some friendly people offered their help and we succeeded to come there before they closed. On our way back to the hotel it had gotten dark and we passed a square that was lit up by millions of different coloured lamps. It was very beautiful!

Today was our free day and we decided to see Edinburgh (luckily, it was so pretty!) We went on a guided tour around the town and saw a lot of beautiful sights. A bagpipe player even welcomed us!

Back in Glasgow in the evening, we called our friend Steve and told his answering machine; “See you at your University tomorrow!” That evening he called and told us to meet him at Milngavie (a suburb of Glasgow) station the next morning. 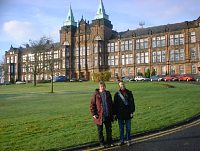 Full of expectations we went to the train station close to our hotel. We saw children wearing their school uniforms (boys with shorts in November!) and grown up men wearing skirts! “Wonder what kind of a Scottish man Steve would be?” After a short trip through the countryside we managed to meet Steve at Milngavie station and he drove us to Strathclyde University.

In the 1960s Steve Bell worked in Jordanhill College, now known as the Faculty of Education of the University of Strathclyde. Together with two others in what was known as The Inservice Staff Tutor Team and over a long period of time working with teachers, headteachers and advisers in the area they formed the Storyline method. In the beginning they called it “Topic Work”.

We also found out that Storyline is bigger abroad than in Scotland (popular and well known in Scandinavia and the US). Steve told us about different ways of working with “themes” like “shops, hospitals and historical episodes”, and he showed us the library with lots of good literature.

At lunchtime Steve took us on a trip to Ross Priory Staff Club, a beautiful building by Loch Lomond. We were struck by the wonderful views, green countryside and the colours of the trees. There were sheep and golf courses all over the place, and all the people we met were so friendly. But they spoke with a strange accent and told us we had a funny sound to our English.

Back in Milngavie we took a walk to look at a little Scottish village. The traffic in Britain is very confusing (they drive on the wrong side of the road!) Kajsa looked to the left and found no traffic but when she stepped out in to the road there was a whole bunch of cars coming from the right! 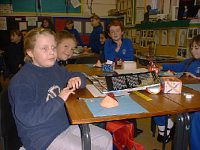 Steve met us at Milngavie station this morning too. He took us to Aberfoyle Primary School in Stirlingshire (78 pupils 3 to 12 years old), a little school in the countryside. Here we met Headteacher Mrs Carol Omand. She was a little nervous today, because a School Inspector was coming to prepare for a general inspection of the school, but we got time to interview her before the Inspector arrived. 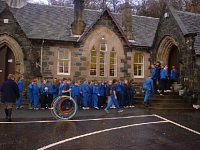 Then we got the chance to introduce ourselves to the pupils. They had heard about the visit from abroad and were very curious. We also had our digital camera with us and were allowed to take some pictures of their picturesque school (typical old Scottish sandstone building located in beautiful surroundings). Every time we stepped out of the school building there was a new kind of weather! Cloudy when we came, then sunny, raining, snowing and then hail.

After lunch the teachers showed us a lot about their Storyline work and we got to talk with the children about it. The atmosphere in the classrooms was very disciplined. We helped the pupils when they made their clay volcanoes erupt with vinegar and baking powder. Then they taught us typical Scottish folkdances.

We saw their afternoon break and Steve told us there were “helpers” on the schoolyard looking after the kids. They had yellow vests. When the recess was over we were surprised to see an eightgrade gather the younger children and making them walk in to the school quietly.

The last lesson we spent with the 5-6 years old. They asked us where we came from and we talked about Sweden and said we came across the sea. A little boy asked if we went by boat and Kajsa said it took such a long time, so we flew by aeroplane. Then he asked Maria why we didn’t take a fast boat!

All the children (except for the 3-4 years old) had an integrated school day and finished at 3.15 pm. We saw their parents coming to pick them up in their cars. It felt sad for us to leave this pretty little school and we really enjoyed our visit there!

Back in Glasgow at our hotel we sat down in a cosy British study room with a fireplace and discussed our impressions of the day. We also prepared for the next day and our educational visit at a larger school in a town called Stirling. 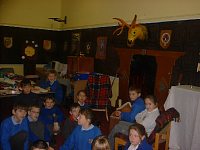 When we arrived at the Charing Cross station this morning the man in the ticket office recognized us. We said; “We are going to…” “…Stirling” he continued, “are you schoolteachers?” he asked. “How can you tell?!” we wondered. ” We have foreigners here who are teachers and they all go to the same places as you!”

At Queen Street Station (the central station) we tried to find our train at the timetable, but it was very confusing to us. We tried to ask but didn’t understand their system of schedule. It took a real long time until our train arrived and even longer before it left. Steve met us 40 minutes late and said “didn’t I tell you about our Scottish train system…”

In Stirling, at St Ninians Primary School, we met the head teacher and spoke to her (most of the head masters in Britain are female). She showed us the school and we visited several classrooms and their new staff room. They had bought new furniture from the Swedish company IKEA which they were so pleased with. The pupils also had their break and we were so surprised to see them eating candies and crisps (in Swedish schools you are usually not allowed to eat candy!).

After recess we got to see several Storyline works in progress. We could feel that there were different atmospheres in the different classrooms and were discussing what the reason could be. Was it due to the topic, the pupils or the pedagogic leader? In the last class they learned about the Jacobines and we got to hear the teacher talk and read about them for a long time. When we asked the children some of them thought it was interesting and others not. A few did not like to read, write and draw in their books and some proudly presented their work to us.

Steve had to leave us at lunchtime and we left shortly afterwards. We said goodbye and finished our visit. When we walked towards town we saw “lollipopmen” holding their stick, helping the kids across the street. At our school in Sweden the oldest pupils (12-13 years old) help the younger children getting on and off the school bus.

In the afternoon we saw the beautiful town and castle of Stirling before we took the train back to Glasgow. We felt kind of sad sitting at our hotel the last night in Scotland, talking about the events of the day.

In the morning we packed our luggage, with Christmas presents and all. It was difficult to close the suitcases! We had heard it was very expensive to shop in Scotland (especially with the bad rate of exchange to our currency) but we found that there were lots of things of good value to buy in Glasgow.

We left our heavy luggage at the hotel while we went on our last walk in to the city. There we caught a tourist bus to sightsee Glasgow. It is such a beautiful town and that surprised us too, since people had been telling us it was ugly, dirty and industrialized. Back at the Theatre Hotel we said goodbye to the nice people working there and took a taxi to the bus that took us to the airport. We were back in Örebro 10 pm, tired and very pleased with our journey. It was so interesting to see the pupils and their teachers work with Storyline.

In January we had a “Storyline-evening” with all our colleagues at Almbro. Five of the teachers had been to a seminar with Steve Bell in Stockholm. They made us make a small hospital theme. We showed our pictures and shared our experiences and we talked about how to work with Storyline at our school

THANK YOU everyone at Aberfoyle and St. Ninians Primary Schools for your hospitality and to all the friendly people helping us finding our way in Scotland ! Last but surely not least THANK YOU VERY MUCH Steve Bell for being so nice to us. You gave us so much of your time, thoughts and wisdom.

Aberfoyle Inspectors Report  The school that was visited has had high praise from school inspectors. 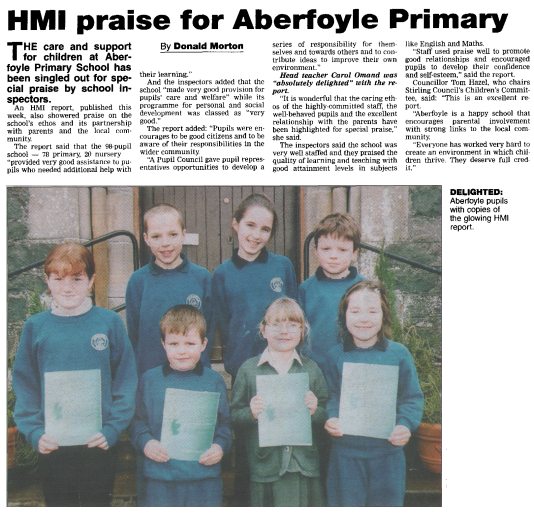