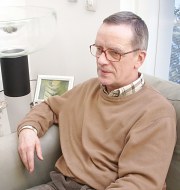 r Eckhard Kohls who was responsible for organising the first Methode Glasgow (later Storyline) courses in Germany during the 1980s retired on Friday 13th January. At his retirement party held in the Kulturzentrum Marstall in his home town of Ahrensburg, his family, friends and colleagues gathered to pay tribute to an extraordinary educationalist. Steve Bell first met him in 1979 at the University of Hamburg where Eckhard was a doctor student and Steve a visiting lecturer. When Eckhard was appointed as leader of the Grund und Hauptschule department of the IPTS (Institute for Practice & Theory in Schools) Ahrensburg in 1982 his centre became a regular base for ‘Methode Glasgow’ courses. As he moved on to IPTS Ammersbek in ’86 and then to IPTS Neumünster in 1994 the warm relationship continued. Eckhard developed his own special interest in Lernenwerkstatt – landscape for learning which encouraged learning by sharing knowledge and experience. This involved students in self-evaluation, giving feedback to others and acting as ‘critical’ friends. He will be sadly missed at the IQSH but already he is chairing the planning group of the Marstall Cultural Complex in which we met where I am sure his organisational skills will be greatly appreciated. We wish him a long and happy retirement.