A personal reflection by Sallie Harkness

Storyline was first transported to Kosovo (previously part of the Federal Republic of Yugoslavia and now under the administrative control of the United Nations) by Danish colleagues Anelise Rasmussen and Ingelise Jorgensen. Topics used as exemplars on their courses were ‘the Community House’, ‘the Flower Shop’ and ‘Trucking’. In June 2003 I had the privilege to work with Anelise in Pristina where we gave a fourth Storyline course for teachers using ‘Land of Storybook’ as our exemplar

The course was part of continuing inservice experience provided by the Adventist Development and Relief Agency International. ADRA has been active in Kosovo since the end of the war in 1999. Their first priority was to help rebuild schools but soon it was clear that teachers needed much support in order to implement the new Kosovo Curriculum developed with the help of UNICEF.
This document calls for child centred approaches, integrated learning, differentiation and groupwork. Storyline provides a user-friendly structure for thinking, planning and delivering the curriculum in ways which meet these requirements.

Twenty five teachers met in the Grand Hotel Pristina to take part in the Storyline activities. The course followed the usual workshop pattern of key question, discussion, activity and then feedback and reflection. Wall displays included artwork and writing. ‘Land of Storybook’ proved to be a rich and varied topic which allowed the teachers to draw on their cultural heritage of story and rhyme.

Throughout, Anelise and I had the support of the ADRA team led by Education Co-ordinator Holly Hughson. Our interpreter Antigona Dajakaj gave continuous translation into Albanian solving any problems regarding meaningful communication.

The teachers responded with great enthusiasm and took part in all the suggested activities. It was clear that they enjoyed the course experience. Many expressed their intention to use the topic in school next session.

After work each day there was time to relax and enjoy eating out in one of the many restaurants which have sprung up in Pristina to cater for the ‘internationals’. A highlight of our visit was when Antigona took us to a family wedding party in the country where the bride and her women friends were celebrating the marriage with music and dancing.

In August Antigona came to Scotland for a week’s stay in order to work with me on a Trainer’s Manual based on the ADRA courses. This includes text in English and Albanian and has a chapter entirely devoted to Storyline.

It is hoped that Antigona and Bahtie, one of the ADRA trainers, will come to International Storyline 2 in Elsinore, Denmark in November where they will make a presentation about the Storyline Development in Kosovo. 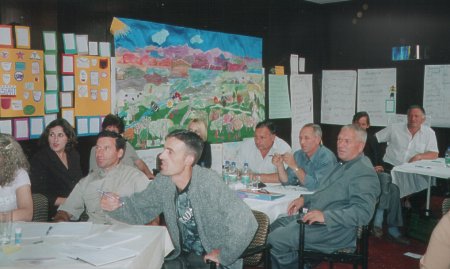 The Storyline Course was held in a conference room in the Grand Hotel, Pristina. 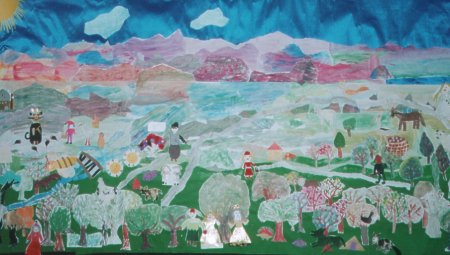 The Storyline Topic was ‘Land of Storybook’. Painted paper was used to create the fantasy landscape then storybook characters and their dwellings were added. 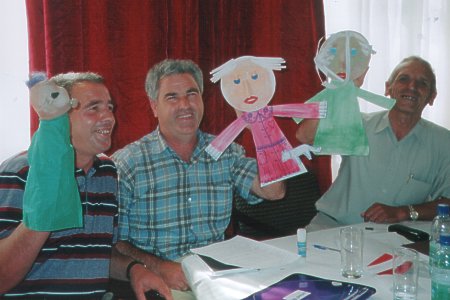 Paper-plate puppets were a popular choice for presenting incidents. 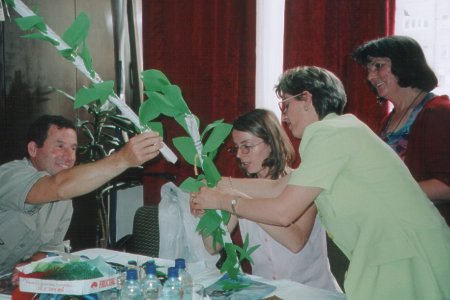 A giant beanstalk was constructed to convey Jack to the giant’s castle. 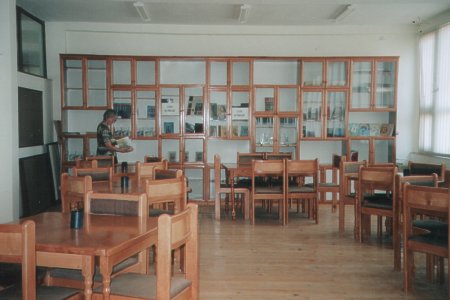 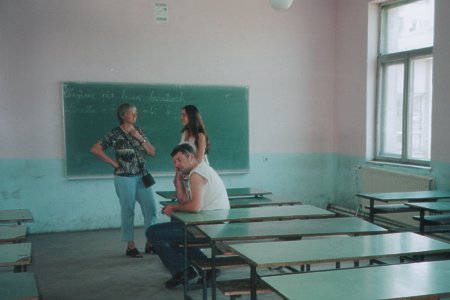 This typical primary classroom highlights the need for improved resource provison in Kosovo. 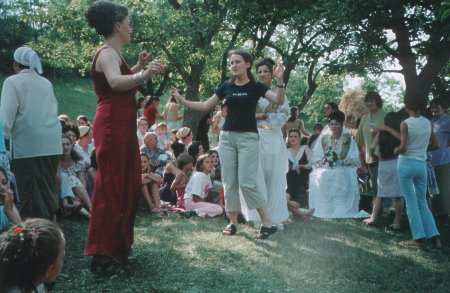 Our interpreter, Antigona, dancing at a traditional Albanian wedding party. 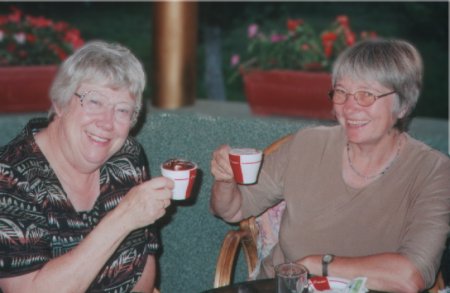 Time to relax at the end of the working day – Sallie and Anelise enjoy a coffee at one of the many restaurants which have sprung up to cater for the needs of the internationals.