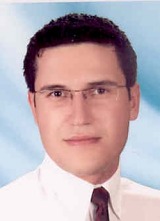 Serkan Güney, a Turkish teacher, came into contact with Storyline through his sister Selma who is a teacher in Aarhus, Denmark. This led to his participating in the International Storyline Conference 2 in Elsinore, Denmark, in November 2003. Since returning to teach in Turkey he has used Storyline successfully in his own classroom which has encouraged him to speak about his experiences. Recently he was invited to give a course at a large conference for 1200 teachers. Although his group was much smaller than that he enjoyed his experience. These are some of his reactions – “You should see their faces. They couldn’t believe how easy it was to go from one discipline to another and in the same theme. After that I showed a video cassette about a Storyline filmed in Scotland which is about “Space Abduction”. I translated it from Danish to Turkish. If I didn’t do that they would still understand it again because they where so excited. Even after my presentation time was over people would not leave the place and they asked and asked so many questions. They took my mobile number and my mail address and already the day after there was some mail from them. Of course they asked me to give more information. One them said that she had already begun to do the same Storyline in her own class. And she was asking me how she could go further with it.”