Can Storyline be used in a Technical High School?

Thirteen members of staff from Haram Vidaregåande skule (Haram Upper Secondary School) from Brattvåg, Norway, visited Glasgow to attend a one-day Storyline course with Steve Bell on Monday 1st October. They were accompanied by three representatives from the business community of their home area. The school is particularly engaged in preparing students for careers in the engineering and technical fields and are interested to know if Storyline can be adapted as an approach that would fit effectively into their system. This would be another ‘first’ since I am unaware of Storyline being used elsewhere in a technical high school like this. I look forward with great interest to see what may develop. 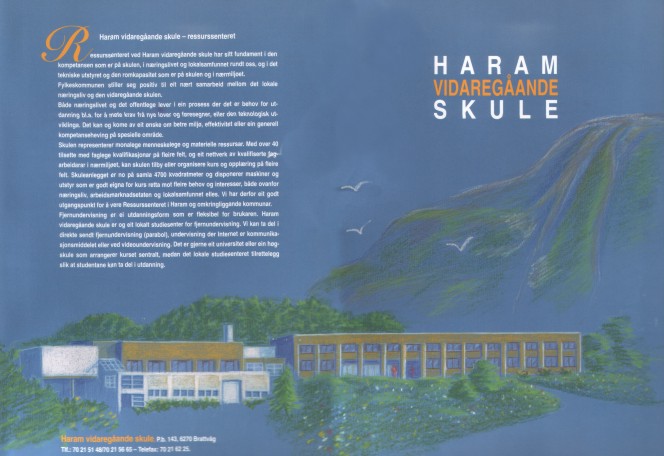 Haram vidaregåande skule is seated in the centre Brattvåg in the municipality of Haram, and is the only upper secondary school in this area. The school is a combined school with about 270 students and 40 teachers. It offers education in the following lines of study: mechanics, electronics, healthcare, general knowledge subjects (cf sixth form) and a four-year course combining “sixth-form” classes with the qualifications for a craft certificate within the technical sector. In addition, the school has a resource centre, where about 400 – 500 adult students take part in shorter or longer courses every year, often in connection with demands for new certifications in trade and industry. Rolls-Royce Marine AS has three subsidiaries in our municipality – (dep) Deck Machinery-Brattvåg, Automation-Longva and Steering Gears Tennfjord. Rolls-Royce Marine AS is the largest employer in Haram.

The trade and industry in Haram is of a considerable size, totally depending on the international market. In particular the marine industry has built up a high international competence over the years. This network of contacts has been of use to the school on several occasions.

Through the “Harams-model”, eight pupils from “Haram vidaregåande skule”, attending the advanced course 1 or second year, with mathematics and physics as core subjects, have been chosen to participate in a motivation course aimed at future engineers. Rolls-Royce AS dep. Deck Machinery-Brattvaag, Rolls-Royce Marine AS dep. Propulsion, Aker Brattvaag AS and Ulstein Shipyard AS fully finance this course in co-operation with the Norwegian Institute for Trade and Industry (NHO). It is the Small Piece Trust , whose headquarters lie in Stratford in England, that is responsible for this course. The pupils have had four days of basic training at our school, and they got the rest of their training (9 days) in Stratford in February 2001. It is the third consecutive year that “Haram vidaregåande skule” takes part in this project, and so far the school has received nothing but positive feedback from pupils and course supervisor alike.

The need for qualified manpower, especially engineers, in trade and industry, has been the focus of attention continuously. As a result, “Haram vidaregåande skule” has – as one of three secondary schools in the country – established a four year course in technical and general subjects (“TAF”) , which provides the pupils with a craft certificate as well as the Certificate of Secondary Education (cf A-levels). High standards are demanded of the applicants, and pupils from the county Møre and Romsdal compete for one of the twelve places available. During the four years, the pupils get an education combining training in a factory 2-3 days a week with a theoretical education at school 2-3 days a week. Rolls-Royce Marine AS gives a number of these pupils such education. The companies often give us favourable assessment of these particular students.

Our school also participates in national and international projects. Together with the Haram municipality, we were chosen to become a partner in a project called PILOT (project, innovation, learning, organisation and technology), which is a three-year, national ICT-project. In addition, we take part in an international project (SITES-M2), run by Stanford University in the United States. This is also an ICT-project, in which we co-operate with trade and industry to expand our learning arenas by using a learning method called Storyline. It is much used in primary schools and to some extent at university level, and it is a form of problem-based learning. According to scientists at the University of Oslo, we are the only upper secondary school in Norway practising this method. Rolls-Royce Marine AS is used as a learning arena in this connection.

“Haram vidaregåande skule” co-operates closely and well with the local trade and industry. However, the school faces great challenges with regard to acquiring higher levels of competence in the years to come. Society changes rapidly, not least in connection with development of new technology. Our school staff have an average age of fifty years, something which makes the challenge of rapid change even greater