As an up-date to the previous news item Gunnar Jonsson of Luleå University reports some success in his experimenting with Storyline for educating student teachers at a distance by video-linking. His view is that he is gradually finding better ways to stimulate interest and communication among the learning groups.

Gunnar Jonsson writes about using Storyline in Distance Learning For me it feels that the attempt to use Storyline for distance learning has been successful. I made some modifications in the key-questions during the course. For instance, I found that it was sometimes better that I didn´t give the students the same key-questions because when I did so I found that their accounts of the problems were being shorter and shorter because when one or two groups had made their accounts, there was not so much more to say.

The ending of the Story was also very successful. We had both morning and afternoon in the tv-studio. During the morning we played an interactive drama. I got help from a school class (grade six) from Luleå. They came to the TV-studio where they acted a drama about a family of settlers who lived at the end of the 19th century. In the drama the family gets a visit from a man from the forestry company who wants to buy their forest. At that moment my studentsget involved inthe drama. Before the drama started, I told mystudents to act the characters of scientists. They had now the mission to give the settlers a piece of advice in the very difficult choice the family had to make. Should they sell the forest and give up their ecological way of living so they instead could get a higher standard of living in the high technological communication community? For being able to give this important peace of advice they had to interview the settlers about a lot of things. All this was made via pictures and sound sent via the telephone network.

One of the newspapers (Norrbottenskuriren) was present at the event. The day after it was a big article in the newspaper written in a very positive spirit. There was also present a photographer present from the Swedish television channel 4. They are going to make some advertising films about the University. In the afternoon an expert visited us from the county administrative board. She told us facts about some specific settlements in their surroundings.It has been very developing for me to teach in this way and I think it has also been developing for my students. This was the first time I did it in distance tuition and I know that next time I will make some change in the way of doing it.

If you have any ideas or information please contact him at 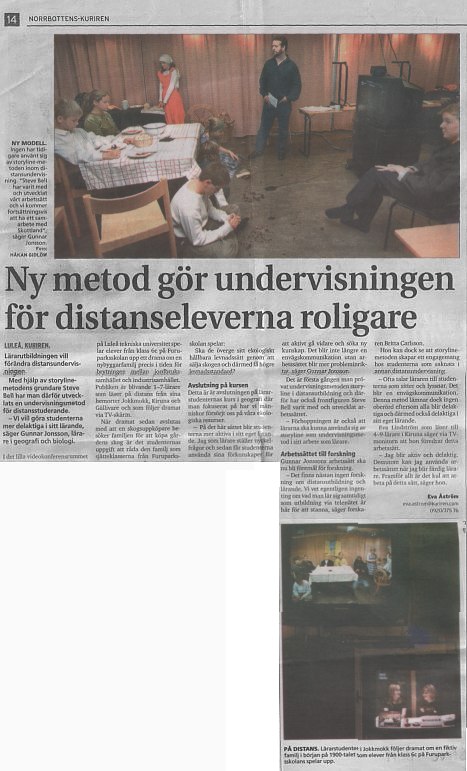