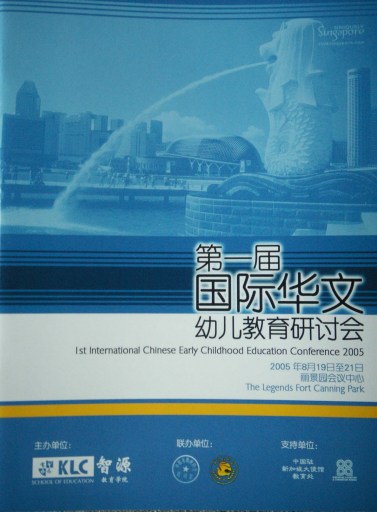 The 1st International Chinese Early Education Conference 2005 was held in Singapore from 19 to 21 August 2005. Organised by the KLC School of Education and supported by the Crestar Educational Group including LEGO Educational Centres, it attracted 300 Mandarin-speaking delegates and was held in The Legends Fort Canning Park. Mr Chan Soo Sen, Minister of State for Education, was the guest of honour and welcomed the participants. 60% of those attending were from China and the others from Singapore and neighbouring countries. Early Education was the focus and Steve Bell was invited by LEGO Educational Division to present a keynote speech on the ways in which Fairy Tales could be used in early education. This was as part of the celebration for the bicentenary of the birth of Hans Christian Andersen. At the invitation of LEGO Educational Centres two three-hour workshops were also presented by Steve Bell. The first was for 100 teachers in the Kinderland Kindergarten network and the second for 40 parents.