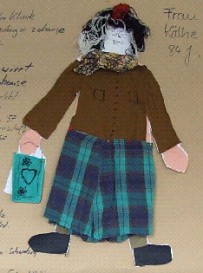 The Storyline Approach has been increasingly used with adult learners. An outstanding example is a curriculum on palliative care developed by the German Robert Bosch Foundation. The idea was to create a course for nurses and auxiliary staff in nursing homes. Due to the demographic change in Western societies more and more people spend the last months of their lives as residents of nursing homes. So it has become most important to train the staff in dealing with life-limiting illness, dementia, pain, and other distressing symptoms. The aim of a palliative approach is to improve the quality of life for individuals and their families by reducing their suffering and their physical, psychological, and spiritual needs.  The one-week-course on palliative care uses a Storyline, in which an old woman moves into a nursing home and lives there for some time. Then her condition worsens, she suffers from a number of physical symptoms as well as from dementia and eventually she dies. In following this narrative the participants of the course get to know the main aspects of palliative care. These do not only include the relief from pain and the offer of support for an active life until death. Even more important is the fact that palliative care is an attitude of empathy towards the patients and their families.