At the invitation of Mr Noppadon Hor-thong, Director of The Institute for Resource in Education Development, Sallie Harkness & Steve Bell were invited to present three two-day Storyline Workshop courses in different centres in Thailand. We extend our sincere thanks to him for providing us with this marvellous opportunity. It should be noted that our arrival in Thailand was shortly after the death of the King’s sister, a highly respected

Princess. Our courses coincided with a period of official mourning and it will be noticed from our photographs that all involved in the courses wore either black or white as a token of respect. The first course on Saturday & Sunday 12th & 13th January was based in the Nakhon Sri Thammarat Rajabhat University situated on the southeast coast of Thailand and was organised by a team from their Faculty of Education. The Vice Dean Dr Aphinphorn Sathitpakeekul, acted as our interpreter and we were greatly supported by several willing assistants and especially Waradee Lertgrai and Chiraporn Nhoorit. The topic selected for all three courses was Animal Rescue Centre – very topical in modern Thailand. On this course it was interesting for us also to meet three teachers of ‘ English as a second language’ coming from America, England and Canada. The second course on 17th & 18th January was based at St Antony’s School in Chachensao, 70 miles to the east of Bangkok. It is a large private school with some 3,000 students run by the St Paul of Chartres Congregation. The school principal Sister Karnchana Soddprasert and her staff organised the course very efficiently and we were very grateful for the tremendous support from Noi & Anne. We were delighted that an old friend Dr Walai Panich from Chulalongkorn University was able to be our interpreter on this course. A sister school, St Joseph’s in Bangkhla, Bangkok, was the centre for our final course on 19th & 20th January. Around 120 delegates participated which made this the largest course of the three but the spacious accommodation and the wonderful resources meant that the workshop ran very smoothly. On this occasion our interpreter, Indi, was an English teacher at St Antony’s School and Noi and Anne were also present to add their support. Sister Somjit Chompaisarn was a gracious hostess and deserves sincere thanks for her hospitality. We would like also to thank both principals for the generous gifts we received. A special mention must be made of the wonderful help and assistance rendered to us over the second and third courses by our friend Patchara Poomachati. She was our guide and supporter throughout. 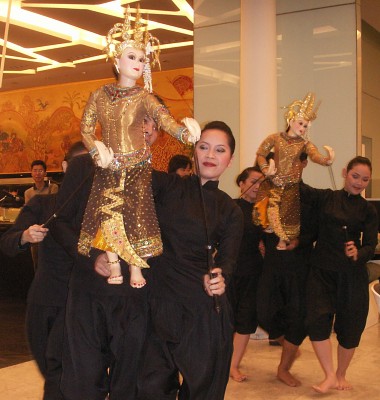 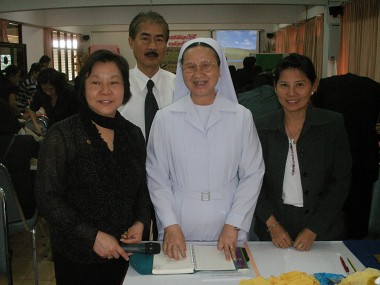