We are delighted to learn from Ken Brown that he was selected as a Wal-Mart & Sam’s Club Teacher of the Year in 2007 for Interior Alaska. He says “ I am certain that my use of the Storyline Method in the classroom was responsible for my nomination and selection for this award.”

Ken and his wife have spent 9 years teaching in remote Eskimo villages in the Alaskan Bush. These villages are only accessible by small airplanes. He explains “As you can imagine, it is difficult for children to experience the rest of the world when many of them have not even visited the nearest village 18 miles away. The Storyline Method is particularly useful in these remote areas, where you can’t hop on a bus to visit a museum or historical site. I was able to give my Eskimo students the opportunity to experience life outside of the village by bringing the world to them through my use of Storyline. 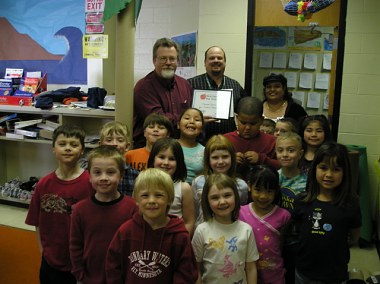 I’ve also been able to use Storyline to teach my Eskimo students about their own culture, land, and language. One of my favorite activities was spending the night with about 20 third graders, in winter, inside a traditional sod house built into the side of a hill about 7 miles from Chevak, Alaska. We traveled by snowmobile and sleds to the sod house, cut firewood, and ate traditional foods prepared inside the sod house. My students left with a real understanding of what life had been like for their grandparents and great-grandparents just 100 years ago. But it was the Storyline Method that prepared them for that culminating event, and made it much more meaningful to them.
Click on ‘more info’ to read a newspaper article about my recent use of Storyline in Fairbanks, Alaska (ironically, it was printed during my visit to Glasgow for the Third International Storyline Conference).”

The students in Ken Brown’s first grade class at Woodriver Elementary School are all leading double lives. Yes, they’re learning how to read and write and add, subtract, and multiply, but they are also working full-time at the Woodriver Hotel as bellhops, store clerks, security guards, maids, desk clerks, and doormen.

At the beginning of the school year each child had to come up with a name for their character and decide on a job. There’s Hip-Hop Juliet, a bellhop at the hotel, and Wyatt Gameboy, the hotel’s doorman. Bridgette Boderot is the parking attendant and Qoya White is a clerk at the hotel store.

But Brown didn’t let the students stop there.

“The first story the kids write is about who their characters are and a day in their lives,” Brown said.

The children each had tocome up with elaborate back stories for their characters. They created families for them, decided what they do for fun, who their friends are, what time they wake up in the morning and any other details that make the characters real and compelling.

Ian Ludwig’s character, Steve Vale, doesn’t have the most glamorous job.     “He cleans the toilets and stuff,” Ludwig said.

But that doesn’t mean his life isn’t interesting.

Like a lot of people, when Steve Vale isn’t at work he’s got hobbies and interests. For example, he likes to eat ice cream and keep active.

“He chases crocodiles all the way to Hawaii,” Ludwig said. “He’s a pretty brave guy.”     Brown, who’s been doing similar Storyline projects in his classroom for 13 years, said he’s always amazed at how imaginative the children are.     “Kids are more creative than we are as adults,” he said. “Sometimes they come up with twists and turns that we as adults would never come up with.”

April Collison’s character, Chloe Bridge, has to get up at 3 a.m. each day for her job as a maid. But she likes her job, especially washing dishes. In her spare time, she likes to paint.

It’s getting to create those little details that Collison really likes about the Storyline.     “You get to write and you get to write what you want to write,” she said.

Being able to control their characters and the world in which the characters live in is empowering for the children, Brown said.

“It really fires up the kids. The kids really have ownership of it and direct it, unless I spice it up with something they weren’t expecting,” Brown said. “I’ll inject something like a hotel burglary or a big surprise, something they’re not expecting.”

Just like real life, everything isn’t always smooth sailing at the Woodriver Hotel. The children are often presented with challenges and problems to solve.

They have to decide how their characters react to difficult situations—how it makes them feel and what actions they take to help find a solution.

Recently, for example, $1,000 was stolen from a guest at the hotel. Kris Sayer decided that his character, James, would investigate the crime by searching the hotel store. He found that all of the necklaces at the store had recently been purchased by one person. He concluded that the thief probably used the stolen money to buy the necklaces, and found the crook hiding in the store and turned him over to police.     Jake Stone’s character, Jack Marx, is also a hotel security guard. While he was investigating the burglary, he heard the sound of breaking glass. He found a broken window and crawled through it only to find the crook trying to hide. He captured the crook by throwing a large net over him.

The two stories don’t really match, but that’s not the point, Brown said.     “It’s the fact that they have that sense of ownership,” he said. “Let them create the castle (in a castle Storyline), let them create the hotel and the scenery.”

And most importantly, let them create the stories, making them their own.

The imagination and the fun of creating a character is important, but Brown uses the hotel as a springboard to teach and integrate a wide variety of concepts in a wide variety of subject areas. Using the hotel as a starting point, he can teach math, reading, writing, social studies, and problem solving, often without the children even knowing they’re doing anything beside coming up with fun, creative stories.

“It’s so flexible that you can teach what you need to teach with the Storyline,” he said.

For example, Brown can use the hotel Storyline as a way to introduce money to the children. He’s also used the hotel to teach them about concepts in geometry such as area, showing them how to measure a vacant lot to figure out how much land they would need to build a hotel like the one they created in class. And, of course, the children get to practise their writing and reading skills as they create and share their stories with others.

This method of teaching, now known as the Storyline Method, was extensively developed in Scotland and was originally called Scottish Storyline, Brown said. Teachers were trying to find a creative way to integrate the curriculum, to make it more meaningful for the kids. It was a smash in Scotland and soon spread across the world.     And it seems like the method has some fans in Fairbanks.

“I like writing about her. It’s fun,” said Amara Hackett, 6. Her character, Miranda, is the hotel’s recreation manager.

“It’s just really fun thinking up some stuff about him and what he would do next,” he said.

The first grader said he can’t wait to see what fun adventures his character will experience.

“It’s going to be really cool,” he said. 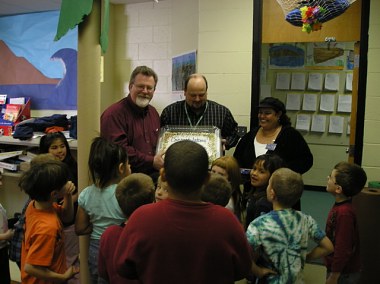