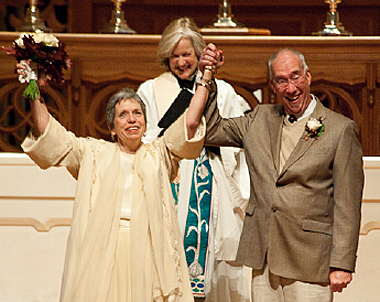 When the invitation to attend the marriage of Storyline Design Director, Jeff Creswell and Caryl Menkhus, Director of Training for the Godly Play Foundation, arrived in Newton Mearns I was delighted to find that my diary was clear for the last week in November so I wasted no time in contacting my travel agent.

In less than twenty four hours I was booked with KLM/Delta through Schipol direct to Portland.

The first special event of the week was the wedding rehearsal and dinner. The evening meal was held in a local Italian style restaurant and gave members of the two families the opportunity to get acquainted. Between them Caryl and Jeff have eight children and three grandchildren. Many other family members including Caryl’s twin Charyl and Jeff’s parents joined this happy occasion. As I have been a frequent flyer to work with Jeff in Storyline events for nearly twenty years I am considered to be ‘family’ – a great honour!

Two days later there was another large gathering in Jeff’s daughter Jennifer’s church hall to celebrate Thanksgiving with the traditional turkey dinner. As more than sixty attended four turkeys were required.

Friday 26th was the big day of the wedding held in the magnificent surroundings of Trinity Episcopal Cathedral. Nearly three hundred colleagues, friends and family members witnessed the ceremony then enjoyed an evening reception in the adjacent Kempton Hall. Many Storyliners were present – Helen Crandell, Roger Fisher, Ned Hascal, whose wife Louise catered the delicious dinner, Shelly Othus, Rebecca Plaskitt and Carla Wilson. Also Joan Miller and Jeff’s sister Janet who worked on the team of the 2009 International Storyline Conference.

It was a wonderful tribute to two very special people. I was so happy to be there in person to give the congratulations and good wishes of Storyline Scotland and of the many other European Storyliners who hold Jeff and Caryl in great affection.

My week long stay in Oregon was over all too soon but it has left me with many happy memories. I was lucky to enjoy a trouble free journey back to Scotland arriving just before heavy snow created traffic chaos and closed most of our airports. Clearly I was protected by the magic of Storyline yet again!