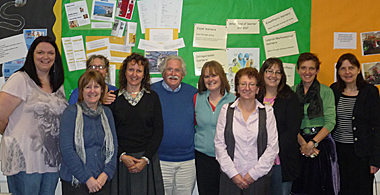 A new, exciting Storyline project involving three secondary schools and five primary schools is taking place in North Yorkshire, England at the moment. Inspired by an ‘Introduction to Storyline’ presentation run by Jill Wells, Kathy Robson, Subject leader and Assistant Headteacher at Lady Lumley’s School in Pickering, researched the potential of using the Storyline approach for second language teaching and then decided to bid for a grant to undertake a transition venture based on Modern Foreign Languages with three secondary schools and five primary schools. This was organised through the ‘Links into Languages’ group from Yorkshire and The Humber. After a great deal of hard work Kathy was successful and a Storyline group was formed.

Jill Wells (Headteacher of Sinnington and also Rosedale Abbey Primary School) then organised for Steve Bell to visit the group and we had two really successful days learning about Storyline, bonding over dinner at a local Tapas bar and writing a Storyline transition project using modern foreign languages as the starting point.

Sinnington Primary School, a small school on the edge of the North Yorkshire Moors, and Rosedale Abbey School, an even smaller school (20 pupils!) have linked up with their feeder school Lady Lumley’s School. Lady Lumley’s School already supports both of these primary schools in the delivering and training of French each week and it seemed a natural progression to write a Storyline together. Their Storyline project is called ‘The Exchange’ and looks at the exchange between children from England to Morocco. The primary schools will be looking at most aspects of the story in English linked to a geography topic but using the MFL experts and also the Year 7 and Year 13 students from the Secondary school to help with the French learning. The secondary school is following the same Storyline but completing it in French.

Yet again Steve Bell managed to enthuse and delight people with his presentation and workshop. All went away inspired to use Storyline in their teaching and excited about how they could continue to motivate the children they teach.