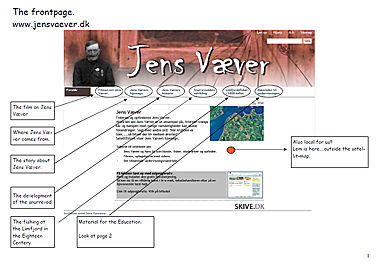 As most of us know, Finn is a prolific Storyline designer with many books to his name but over the last five months he has been working on a very special project which he explains here – Jens Væver was born in 1822. He and his family were mainly fishermen but from time to time he was also a cattle drover taking animals from Spøttrup Borg to Germany for the big cattle market south of the border.

In 1825 the Limfjord was opened to the North Sea by a winter storm and the salt water flowed into it destroying the normal freshwater fish and plants. After 5-10 years the fauna adapted and new fish began to thrive especially bottom feeders like plaice. At that time the normal way to fish with nets meant that they could not fish in deep water where the best and biggest fish were living.

The challenge for Jens was to find the best way to catch these fish. In 1848 he found the solution……snurrevod (in Danish) in English – Danish Seine/anchor dragging/fly-shooting. After some problems he perfected the technique. All fishermen in the Limfjord area started to use the snurrevod and this practice gradually spread all over Denmark and then abroad.

Nobody asked “Who got this fantastic idea?” and Jens was unknown outside the local area but in 1896 a professor took notice of the poor inventor. The association for fishermen in Denmark honoured him with a diploma and 36 Dkr.

In 1912 a local writer (Niels Sørensen from Lem) heard the story about Jens. He was angry to find that the whole world talked about this fantastic invention but nobody knew about the inventor and honoured him in the right way. He wrote a lot of articles in the local Newspaper and this was the start for Jens to be better known at the age of 90, 64 year after he started using the snurrevod! Finn has designed a website on this remarkable character which provides educational resources in Danish for studying about Jens Vaever.